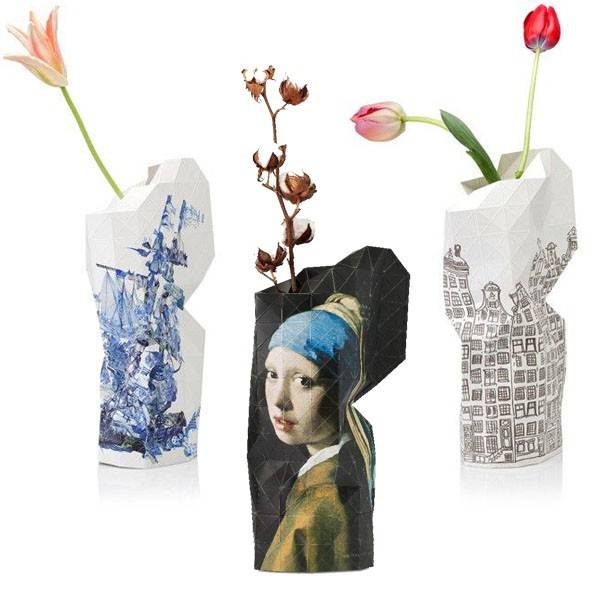 The Paper Vase Cover by Pepe Heykoop & Tiny Miracles is a good example of sustainable Dutch design. The folding vase has a stylish and modern appearance, but is at the same time very simple and basic.

This has everything to do with the production of the Paper Vase Covers in India. A great background story about a small-scale Fair Trade project for a very underprivileged group of people, the Pardeshi. You can read and see it as you scroll further down.

Moreover, the Paper Vase Cover is an ideal letterbox gift that makes everyone happy: the makers in India, the receiver and therefore yourself.

How can you help a poverty-stricken community in an Indian metropolis to break the cycle of poverty and create their own sustainable livelihood?

Tiny Miracles does this by creating fair paid work for women from the Pardeshi community in Mumbai (India). But also by providing education and health care, which makes them more aware and gives them more self-confidence and self-esteem.

The main ambition of the Tiny Miracles Foundation is to make Pardeshi completely independent within 10 years. With the premise that giving money in the long run just doesn't work. What does work: giving these people a goal in life plus the tools to become self-supporting. That's why real jobs are so incredibly important.

Tiny Miracles was founded by Laurien Meuter and her cousin and designer Pepe Heykoop. He developed a series of design articles that are easy to produce by the (mostly illiterate and uneducated) women. The best known and most successful product is the Paper Vase Cover. This is a paper folding vase, with which you can create a modern design vase in no time at all.

It's a two-way mechanism. On the one hand beautiful products that are sold in museums and high end shops all over the world. On the other hand, a growing workforce within the Pardeshi community. Since the start of Tiny Miracles in 2014, the number of women in full-time employment has grown to 100+ women today.

The Tiny Miracles Foundation is a Dutch-based aid organisation founded in 2010 by Laurien Meuter. Tiny Miracles focuses on one specific street in the red light district of the Indian metropolis of Mumbai, where a community of about 700 people - the 'Pardeshi' - lives whose road surface is their only 'home'. Producing the Paper Vase Cover and other designs by Pepe Heykoop is a unique opportunity for Pardeshi to break their poverty circle.

The ambition is to elevate this small community from 'very poor' to 'middle class' in the next 8 years. By 2020, the community must be economically independent. Then they must have education and health care at the level of the middle class and an income of at least 8 euros per person per day. And perhaps most important of all: happy childhood memories for the children.

Until recently, the Pardeshi community was largely dependent on the sale of wicker baskets, for which, however, there is hardly a market. The supply of other jobs in this area is very limited. That is why Pepe Heykoop set up a workshop in the middle of the community in 2012, where the women are educated and given a job that enables them to better support their families and households.

Dutch designer Pepe Heykoop (1984) established himself as an independent designer after graduating from the 'Living' department of the Design Academy Eindhoven in 2008.

In addition to his work for the Tiny Miracles Foundation, he mainly creates unique, handmade objects with his own signature in his Amsterdam studio. Heykoop is interested in the relationship between design and art, which comes together with his love for low-tech techniques and the recycling of utensils.

Pepe Heykoop's designs can be seen at design fairs such as the Salone del mobile Milan, TENT London, DMY Berlin and IMM Cologne. Together with the Tiny Miracles Foundation, Pepe Heykoop develops in his Indian studio articles that are made in larger quantities, such as the Paper Vase Cover.

Shop By
Shopping Options
For
Price
Material
Colour
Sustainability
Brand
My wish list
Last Added Items
Go to Wish List
You have no items in your wish list.
Keep up with our actions and discounts.
and get 5% discount rightaway on subscription.
Submit
Coupon:
Note your code en start shopping
Get your discount